Cottesmore in Rutland is a Village with a rich and important history.

Cottesmore has had five schools in the last hundred years or so, although not all at the same time. Each school has its own unique history. . .

The history of Cottesmore can be enjoyed through its 27 listed buildings, from the Church and thatched cottages up to modern times at the Army/RAF camp . . .

With its long history even a small village such as Cottesmore can produce remarkable people. Here are a few 'sons and daughters' of Cottesmore . . .

100 years ago there were many shops and other trades in the village. Now there but two shops and just a few trades. Where have they gone?

At one time there were no less than seven farms in Cottesmore, but with industrialisation there remains but one in the centre of the village . . .

Ironstone was mined around the Village from 1882 until 1975. Intriguing evidence of this industry's existence can be seen within the restored landscape . . .

Fox hunting in Cottesmore can be traced back as far as 1666. Since that time it has impacted the village and surrounding area economically, environmentally and socially . . .

Between 1914 and 1918, villagers went to war with their friends, the rector's sons and those from the big house. 86 joined up. Thankfully most came back though ten did not . . .

The Parish records go back to the 17th century, for Baptisms, Burials and Marriages. You can now look at them and trace those who lived here . . .

HOW OLD IS COTTESMORE

View out video and book based upon tree-ring dating procedure (dendrochronology). We were able to obtain some exact dates from when some of the building were built . . .

The Heritage Lottery Fund gave us the money and with the support, provided by Leicester and Nottingham Universities it has enabled us to look at the last hundred years of the history of our village.

So we have recorded the land we worked, the schools, the buildings, the shops and how we sent our letters. We have seen how events outside the village – in war and peace – changed our lives. And found some villagers who went on to change others' lives too.

During the nineteenth century and the Industrial Revolution there were changes as young people left the village to earn wages in the new industries.

Between 1914 and 1918, 86 Cottesmore men marched to war. 76 came back. Their experiences were to drive enormous changes for them, their families and the whole of the county. During the twentieth century the number and nature of land-based jobs, in particular, were changed by mechanisation and the demand for servants declined

Cottesmore grew from a peaceful rural village to one that depended on war, or the threat of war. For over 70 years it was an important air base and during the cold war, part of the nation's nuclear deterrent.

Now Cottesmore is a very mixed community with two primary schools, many retired people, workers in all sorts of employment and self-employment but not as self-sufficient as it was. 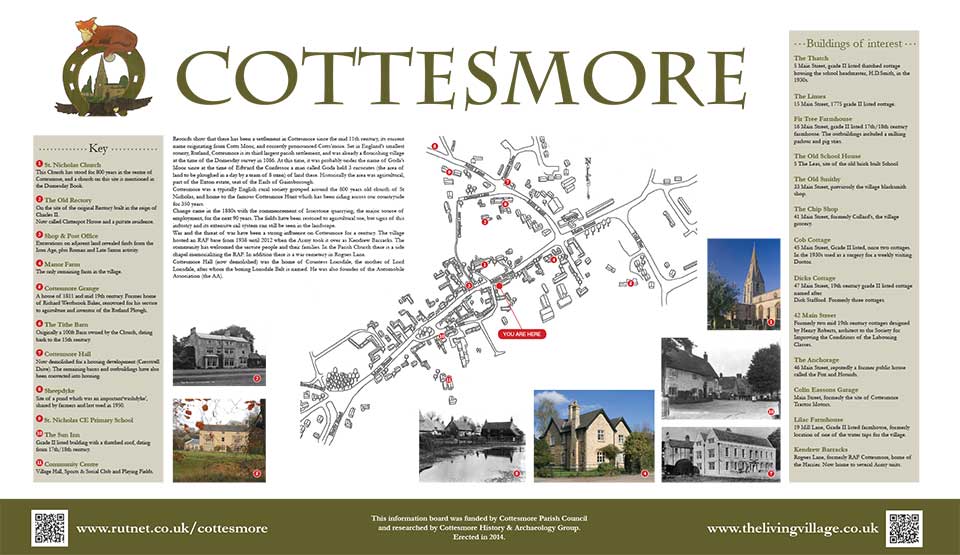