The People of Cottesmore 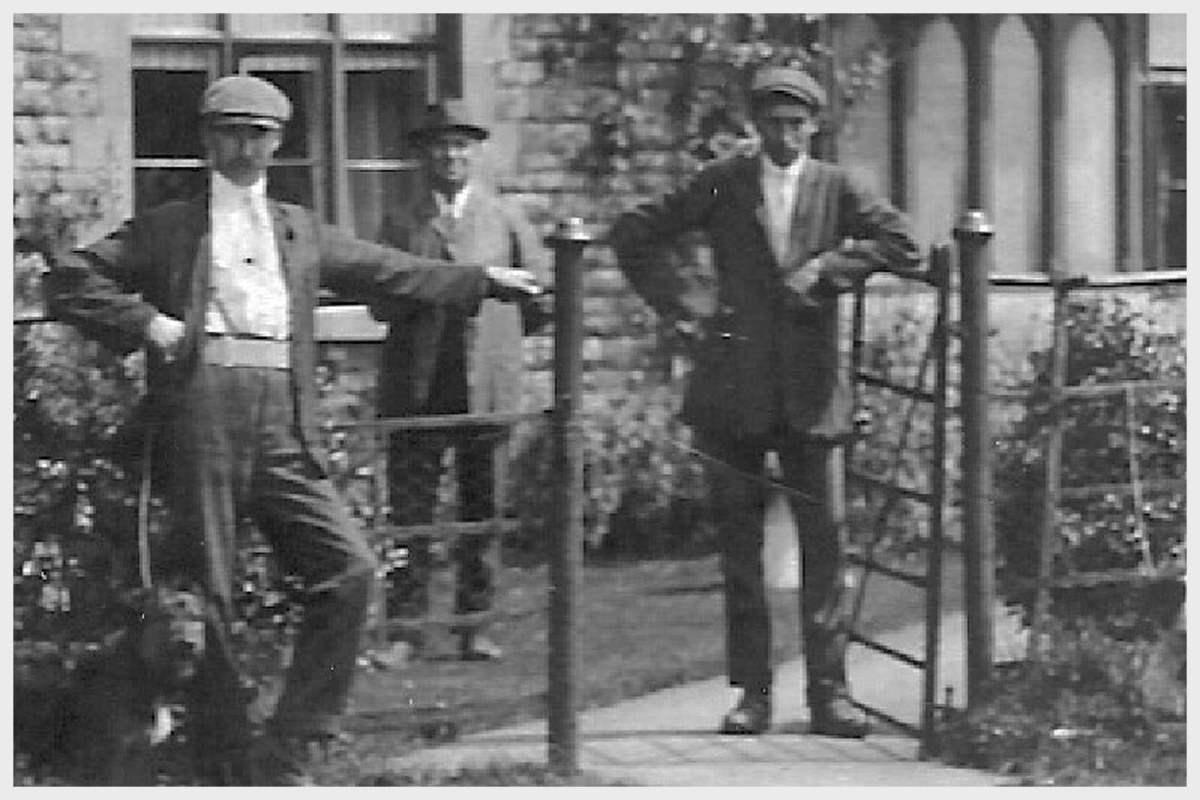 The Hollis family have lived in the village for many generations. They have farmed on the Exton Estates for over 150 years and is the only farmer still working in the village at Manor Farm. They were also builders having built Hambleton Hall and the Oakham Post Office (not the current one) They played their part in the community, being involved at both county and parish level as well as being on various organisation. Below we can follow the family tree over that period and see the many strands.

The first recorded HOLLIS in Cottesmore is THOMAS 1786-1845. Where he was born is uncertain. It is known that his first marriage was to ELEANOR BIDDLE 1791-1814 at Melton Mowbray in 1811. ELEANOR was buried at Whissendine. They had one daughter, MARY who was born at Whissendine in 1814 and died the same year aged 3 months. THOMAS married for a second time at Melton Mowbray in 1816 to ELIZABETH BREX 1790-1870, she being born at Rotherby, Leics. and buried at Cottesmore.

When living at Cottesmore, THOMAS was a Blacksmith and ELIZABETH a Grocer & Draper. (It is reported that on 20 October, 1826 Thomas was fined 20s. for a violent assault on Elizabeth Watkin of the Fox and Hounds public house, Cottesmore).

1A) FRANCES HOLLIS, born 1817 at Cottesmore. Died 1898 at Whittlesey, Cambs. Married 1839 at Cottesmore to WILLIAM GREGORY c.1800-1868, born Buckminster, Leics. and died at Stamford. His occupation was a Builder and Surveyor.

2A) WILLIAM HOLLIS, born Cottesmore 1819. Married 1840 at Cottesmore to ELIZABETH LAXTON c.1818-1899, born and died at Cottesmore. WILLIAM was a Blacksmith and Coal Merchant.

3A) HARRIET HOLLIS, born c.1821 at Cottesmore and died Cottesmore 1890. She was unmarried and was a Grocer and Draper.

4A) HENRY HOLLIS, born Cottesmore 1824 and died Cottesmore 1897. Married 1848, Grantham District to MARY CHRISTIAN c.1820-1904 of Sewstern, Leics. HENRY was a Builder, Brick and Tile Manufacturer and was responsible for the building of Ashwell Hunt accommodation in 1889 at a cost of £6,777.

7A) JOHN TOON HOLLIS, born 1834 at Cottesmore and died 1871 at Peterborough, where he was a Publican at the Palmerston Arms. His first marriage was in 1857 in Surrey to HARRIET LAMBERT c.1829-1866; she born at Sheffield and died Norton, Derbys. JOHN
Married again in 1867 at Cottesmore to HARRIET LAXTON c.1824-1900; she born Cottesmore and died Dorking District, Surrey. After the death of her husband, HARRIET became a Lodging House Keeper in Hove, Sussex.

4B) SAMUEL HOLLIS, born c.1847 at Cottesmore and died in 1917 at Carlton Hayes Hospital, Whetstone, Leics. He was an unmarried Butcher and prior to his death was described as a lunatic.

6B) GEORGE HOLLIS, born c.1852 at Cottesmore. Place and date of death unknown. Married 1876 at Upwell, Norfolk to MARY WHITEHEAD c.1855-1924 of Upwell and died Peterborough District. GEORGE was a Baker of Bakehouse Row, Farcet, Hunts.

3C) THOMAS HOLLIS, born 1853 at Cottesmore and died 1933 in the Skirlaugh District, Yorks. Married 1887, Bedford District to SARAH BEATRICE BURNETT c.1864-1919, born Burnham, Essex and died Ashby De La Zouch District, Leics. With his brother JOHN, he was a Director of Hollis Bros., Timber Merchants of Hull and Leicester, with THOMAS responsible for the Leicester operation. THOMAS & SARAH lived most of their lives at “Bancroft”, Kirby Muxloe, Leics.

4C) JOHN HOLLIS, born 1855 at Cottesmore and died 1949 at Holderness District, Yorks. Married in 1884 at Melton Mowbray, Leics. To MARY ELIZABETH TWIDALE c.1858-1926, born Melton Mowbray and died Skirlaugh District, Yorks. JOHN, with his brother THOMAS was a Director of Hollis Bros., Timber Merchants and had particular responsibility for their Company in Hull.#
JOHN married for a second time in 1931 at Knaresborough District, Yorks. to ANNIE ASHBY ARNEIL (nee TWIDALE) c.1859-1933. ANNIE was the sister to JOHN’s first wife. ANNIE’s first marriage was to JAMES A. ARNEIL c.1885- . He was born in Glasgow and was a Fire Insurance Surveyor.

4D) WILLIAM RICHARD HOLLIS, born c.1863 at Norton, Derbys. and died in 1957 at Weston Super Mare District, Somerset. Married in 1889 at at Axbridge District to MARY FRANCES CARPENTER c.1862-1937, born Bleadon, Somerset and died Weston Super Mare District. WILLIAM spent most of his working life in Old Weston and Kimbolton, Hunts. where he is described variously as a Grocer Draper and Wine Merchant; a Grocer Dealer.

2E) MARIETTE HANNAH HOLLIS, born c.1877 at Cottesmore and died in 1962 at Oakham District. Married in 1902 at Cottesmore to CHARLES BRADLEY, c.1870-1925, born Newton, Yorks. and died Stamford District . He was a Farmer at Uffington, Lincs. and later at Southorpe, Lincs.

3E) WILLIAM HENRY HOLLIS. Born c.1879 at Cottesmore and died in 1959 at Buckminster, Leics. Married in 1906 at Oundle District, Northants. to TERESA BRADLEY, c.1877-1966, born Newton, Yorks. and died Melton Mowbray District, Leics. In 1911, WILLIAM was a Farmer of Cottesmore Lodge and a founder member of the Rutland Branch of the NFU.

4E) HAROLD ARTHUR HOLLIS, born c.1882 at Cottesmore and died in 1977 at Cottesmore, aged 95 years. Married in 1933 at Morcott, Rutland to ETHEL ANN TAYLOR c.1885- , born Grantham. They lived at Red House, Cottesmore where HAROLD was a Farmer.

1G) WILLIAM ALFRED HOLLIS, born c.1883 at Greetham, Rutland. In 1911 he was lodging in Mansfield, Notts. and is shown as a Traveller Grocer.

1H) JOHN GORDON HOLLIS, born c.1888 at Leicester and died in 1918 (WW1).
Before joining the Army, he was a Timber Trade Clerk in the family business at Hull, Yorks.
As a Temporary Lt., 7th Battalion, Leics. Regt. was killed in action during the first phase of the Battle of the Somme on 17 July, 1918, aged 27yrs.

2H) ERIC CARRUTHERS HOLLIS, born c.1889 in Leicester. In 1911 was a Commercial Traveller in the family Timber Company.

3H) HENRY CLIVE BURNETT HOLLIS, born 1891 at Kirby Muxloe, Leics. In 1911 is shown as a Timber Trade Manager in Leicester.

4H) THOMAS GEOFFREY HOLLIS, born c.1893 at Kirby Muxloe, Leics. and died in 1952 in the Hampsted District, London. Married in 1919 to ELSIE RAINE, born c.1893 at Hull, at Christchurch District, Hants. In 1911 THOMAS was a Timber Trade Clerk in the family business.

1L) CECIL HENRY HOLLIS, born 1907 at Cottesmore Lodge and died in 1997 at Grantham Hospital. Married in 1938 at Skillington, Lincs. to EILEEN BETTY BRYAN 1913-2002, born Lyddington, Rutland and died Cottesmore. He took over Manor Farm from his grandfather in 1937. He served for 50 years with the NFU and for 39 years on the Board of Directors for the Central Woolgrowers. In 1958 he became a Local Magistrate and served on the Bench for 19 years. In 1966 he was awarded the OBE for his services to agriculture. He became a Parish Councillor and served for 42 years, 35 of which were as Chairman. CECIL retired from farming in 1977 and moved to a new bungalow at 19 The Leas, Cottesmore.
CECIL HENRY HOLLIS & EILEEN BETTY BRYAN had two children:

2L) BEATRICE HOLLIS, born 1908 at Cottesmore and died in 2001 at Cottesmore, aged 103 years. Married in 1936 at Cottemore to ERIC THOMAS BRADLEY c.1905-1987, born Southorpe, Northants. and died Cottesmore. At marriage, ERIC is shown as a Farmer of Rippingale, Lincs. After marriage, farmed at Cottesmore.

3M) JOHN BOWYER HOLLIS, born1922 at Oakham and died 1989 at Ashwell, Rutland. Married in 1951 to ELIZABETH M. TURNBULL. JOHN was a Corn Merchant and resides in Langham.

4M) HENRY HOLLIS, born 1923 at Oakham. Married in 1953 at Portsmouth District to PAULINE ANASTASIA CROSSE, born 1927 at Tipperary, Ireland and died in 2001. HENRY is a Medical Practitioner and resides in Melton Mowbray.

5M) THOMAS DENZIL HOLLIS, born c.1929 in Oakham. Married in 1974 at Chipping Norton, Oxon. to ANNUNZIATA GARCIA MORALES, born in 1934 at Seville, Spain. THOMAS is a Farmer/Blacksmith and resides in Stibbington, Cambs.

1N) DAVID CECIL HOLLIS, born 1950 and baptized in 1951 at Cottesmore. Married in 1974 at Cottesmore to ZOE MARY NEEDHAM, born 1954 at Oakham. At marriage, DAVID is shown as a Farmer of Manor Farm and ZOE a Dental Assistant of Holme Farm, Cottesmore. DAVID continues to farm in Cottesmore and resides at The Roost, 49 Main St. He is a County and Parish Councillor.

1P) BEN WILLIAM HOLLIS, born 1976 at Oakham. Married in 2007 at Wittering, Northants. to CHARLOTTE ELIZABETH DUNLOP, born in 1979 at Wittering. They reside at Manor Farm, Cottesmore where BEN is a Farmer and CHARLOTTE runs Manor Farm Livery Centre.